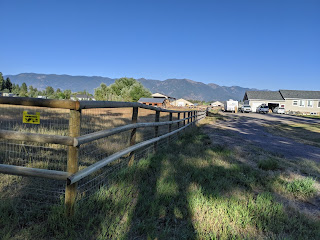 I wrote this story straight through with very few edits and then posted it on Patreon.  After that I made a few edits that were suggested by Pro Writing Aid and I'm reposting it here.

I waited for Anne outside the bank. She would not wonder why I was there. It was normal for us to run into each other from time to time in such a small town. In fact, I had seen her just the day before. As I was heading into the grocery store, she was just leaving. She was a good friend, and we always had plenty to talk about — kids, family, the weather, that sort of thing.

She emerged from the bank carrying a stuffed envelope and some bags from shopping in town.

“Joanie, it seems we see each other everywhere these days.”

“I was just saying that to your brother at the grocery store the other day.”

“How is he liking his job as manager? He never talks to me anymore, now that we don’t see each other at mom and dad’s.”

“He seems to like it just fine. Lots of work, but the money is better I’m sure.”

“I need to stop by my husband’s office and drop off some papers. Would you like to walk with me?” said Joanie.

“Sure. Let’s cross through the park.” I said.

We need to walk through the park today if things are going to go as planned.

“That seems a bit out of the way, don’t you think?”

“I really am in a hurry.” said Joanie, checking her watch.

“It won’t take that much longer.” I said.

I started off towards the park ahead of her, not leaving her much choice but to follow. We walked along chatting and looking at the trees and birds. The leaves were just beginning to change to fall oranges and reds.

Just then I wandered a bit off the path and saw something behind the bushes.

It was her brother. Shot and half buried behind some bushes. Tears came into her eyes, but she said nothing. She stepped back and looked at her brother, and then at me, and then back at her brother. I couldn’t understand her reaction. I tried to move closer and comfort her, but she again backed away and then started running towards the other side of the park. I ran after her. This wasn’t at all like I had expected.

Across the street, on the other side of the park, was the police station. She ran straight in the front door. I followed her in, still a little perplexed. She was at the front desk when I came in. She turned and pointed at me.

“That woman has been sleeping with my husband, and now she killed my brother to cover it up!” said Joanie.

I turned and tried to leave, but two officers who were walking in just then grabbed my arms. They brought me up to the desk.

“That is a very serious accusation. What proof do you have?” said the woman at the desk.

“My brother’s body is in the park behind some bushes. She just showed it to me.” said Joanie.

“So she admitted it?” said the woman.

“I didn’t admit anything because I didn’t do any of those things.” said Anne.

She knew we were cheating, but how did she know I killed her brother?

“I told my brother about the cheating yesterday when I was grocery shopping. He works there. He must have confronted her about it, and she killed him. Then today she was very pushy about walking through the park. She wanted to pretend to find my brother’s body and make it look like a big surprise.” said Joanie.

My friend was smarter than I ever gave her credit for. I still don’t know how she found out about the cheating. We had been very careful.

“I’ve known they were cheating for a while. I was planning to leave today. I bought some things I need and emptied our bank account. I’ve got a flight that leaves in a couple hours. It looks like I’ll be missing it though. I’m not leaving now that she murdered my brother.” said Joanie.

The police put me in a room and went to investigate the scene in the park. I didn’t see Joanie again until the trial. After that, I never saw her again. I’ve never admitted to killing her brother in all the fifteen years I’ve been here, but today I’m going to tell the parole board the true story and maybe it will make some difference. Finally admitting to all of it has already made me feel better.

Popular posts from this blog

April 08, 2021
I just added something on Patreon that I wrote today. It is a story about meditation. It was just something quick I came up with based on some of my own experience. I'll post a portion of it here. I have meditated many times before, but the last one was very different. I sat down on the floor in front of the couch and crossed my legs, as I often do. I closed my eyes and searched with my mind. I could feel the window and the grass and trees beyond. I could feel the life outside watching me. I tried to reach out further, there was life everywhere. I left my body, as I have done occasionally. My body sat motionless on the floor below me as I floated upwards. I floated up further through the ceiling, glimpsing my attic, then I saw the roof. Slowly I spun around and the night sky came into view. It was a clear dark night, with no moon visible. The stars were all visible, like pinholes in a black sheet. I continued upwards. I could feel life all around me. Below me on the ground, in t
Post a Comment
Read more

June 07, 2020
I have been watching a series of Youtube videos by Brandon Sanderson .  The videos are the lectures recorded from his sci/fi fantasy class.  I am currently watching the sixth one which deals with world building.  I am a bit worried about this topic with my story because it seems like it will require a lot of world building.  The second lecture on world building is about making it seem like you did a lot of world building when you only did just enough to make the story work. There is also a lot of good information on plot and character development in the earlier lectures.  He discussed the importance of character arcs and relationships.  Plot points like conflict and promise/payoff were talked about a lot.  I was aware of conflict being important to keep people interested, but I hadn't heard the promise/payoff structure broken down and described like this.
Post a Comment
Read more

August 06, 2021
This is the final version of my third short story. Let me know what you think. I have been revising it for a while, but I finally decided to just be done with it. I have so many other ideas that I want to get to. "What's that sound?" It's a cabin pressure alarm. The ship is leaking atmosphere. "Something is happening to the ship. My course brought me too close to a star. Where am I? I must have gotten off course. I'm going to have to land and make repairs. There is a planet here that should work. I'll have to work in the suit if the air isn't breathable. I can do it. I've done it before." "There it is. It looks red and green from up here, like the swirling colors of a giant marble. I hope that is solid ground. Why am I talking to myself? There's no one else here." After some maneuvers, the ship slides into a relatively stable orbit around the planet. The scans show I should be able to survive down there if the repairs take som
Post a Comment
Read more